Well, well, look who total DOMINATED! Wow, that was total destruction of the entire field by Jett. From holeshot to checkered flag no one was in his league tonight.

Danger, danger for everyone else if this is the new, fast and consistent Jett Lawrence.

Prediction: Yes, we think this is the Jett we will see from now on. Sure, he will have some mistakes here and there but our bet is you are looking at the 2021 champ barring injury.

Uh huh, we told you to watch out for Colt. Mr. Consistent so far two races in. Again, not a great start and had to work his way up. but he did it with percision and pateince. Why he even passed his teammate, Christian Craig back late in the race to secure second.

Prediction: If Colt can start getting good starts he will be the second best finisher in the series.

Good ride for Craig but not great. After his dominating performace at round one this had to be a bit of a disappointment for him. He kind of sounded that way after the race.

Think about this though, was Christian really slower this race or did Jett step it up and Colt simply had a better start? We kind of think this is the case. Holeshots are huge in supercross and Craig didn’t get it.

But based on the qualifier race Jett was going to smoke him anyway, at least at round two.

Prediction: Christian hit his high mark at round one. Caveat: If he holeshots he can win again.

Michael Mosiman got a solid fourth and won his heat race! Nice!

Jo Shimoda is Mr. Consistent this year so far. A fifth in round two backing up his fourth in round one! Nice work kiddo! Nice pick up late in the game for Mitch and Pro Circuit.

Austin Forkner got sixth after a couple of big mistakes. Aye, yea we kind of expected this Austin to return, unfortunately. After making a mistake in the whoops and not being able to do the finish line double (looked scary like he could have easily been landed on) he tangled with RJ Hampshire and they both went down.

It looked like Austin got a little too anxious and forced a pass on RJ. The result was they both went down! Yes, it was really just a racing incident and happens but ‘last races Austin’ probably would have waited for a better opportunity to make the pass.

The ‘event’ in the whoops and losing spots when he could not do the finish line jump probably had him in panic mode. Heat of the moment type of thing like Eli and Vince last race where Eli forced it a little and went down too.

Prediction: Austin feels pressure now to win a race. This could be good or bad. Let’s hope he pulls it off. We know he can go super fast but also crashes. We expect a do or die performance in round three from the kid.

RJ Hampshire looked great again running upfront only to have something crazy happen to ruin his night. Poor RJ! We know he will try his hardest in round three. He always does.

He did it! Nice rebound for the Champ when he had to have it. Great ride after getting a rare good start for him. Wow Eli I guess you see firsthand how much easier it is for you when you get a good start!

BUT, the two new kids, Adam Cianciarulo and chase Sexton were actually pulling away from Eli at the beginning of the race until they both went down in the sand section. So even though Eli can feel good about winning he was not the fastest guy out there.

Granted he knew you have to hang in there 20 minutes plus one lap or it doesn’t mean a thing. Did you realize that Eli didn’t have to pass anyone the whole race except for lappers?

NOTE To Self for Eli: Much easier NOT crashing trying to pass Friese when you are not behind him.

Prediction: Eli will win more races but he will also have bad starts and not be able to work to the front. So expect more ups and downs. If he could figure out starts he could win the championship by being consistent. But we know that is not going to happen.

Wow! Amazing ride for this guy! He worked through the pack like, well, like Eli has been known to do. He did benefit from Zacho going down at the end but still a great ride. He will only get better.

Dylan said after the race he was still a little sore from race one but it did not seem to cause a problem in race two.

Prediction: Dylan will win a race or two this year unless he gets hurt. He does crash more than some it seems.

Ok, what can you say except for a spectacular ride for the 36-year-old Brayton! Good for you man! We all love it seeing an ‘old guy’ get a podium. He really worked hard the whole race holding off pressure from Roczen and others.

Most of us thought he would fde back to sixth or seventh but no! Hoping to see this again soon!

Chase Sexton has to be at the top of this list! The kid was flying after taking the holeshot. Man he looked unstoppable! The only guy all night to do a lap in the 41’s!

Ok, ok, yes, all good things come to an end and same with Chase’s quest to win his first supercross race. Coming out of the sand section the bike hit a lip and he was down hard. Poor guy but that is part of pushing the limits and he surely was doing that.

Prediction: He will miss round three. Darn! But hoping he is just banged up and will be back soon. Will it change his riding? Probably for a few rounds but then he will be back charging and if he has a little luck he will win at lease one race this season.

Adam Cianciarulo was upfront early right behind Chase and pulling away from Eli! And how about him doing that Quad jump! Geez, how can he do that jump and still make the turn??? Amazing.

BUT Adam did it again, made a little mistake and went down in the sand section. You would think Adam could handle sand being from Florida but no! It bite him just like Sexton although Adam’s mistake was simply letting the front wheel dig into the soft sand and tipping over. No biggie.

Prediction: Adam WILL win races this year. Not a race, but races.

Zach Osborne was flying again! And AGAIN makes a mistake that costs him dearly. He was in second closing in on Eli when right at the very end of the race he goes down. Seemed to take a while to get going and ended up WAY back in 10th! Geez.

Prediction: Expect to see Zach at the front or near it again in round three. But will something happen again? Let’s hope not. Once he starts to eliminate the mistakes he will be a constant podium guy.

Cooper Webb was more like the old Cooper tonight. Just like Eli he had to have a good race and worked hard and made it happen. Who didn’t ‘just know’ he was going to pass Kenny when at the end of the race?

Cooper definitely KNOWS he can pass Roczen simple when he wants to. Kenny knows it too. Will we see Cooper start to win races again anytime soon? Not unless he becomes the holeshot king again like he has been in the past. Watch for that.

Ken Roczen decided he wanted to be last on the start for some reason. Who knows ‘why’ but Kenny was in last place right off the gate! This is weird for him as he usually is a great starter. Does anyone know why?

He rode great though and worked his way up to a fifth place finish. That is great especially when you compare it to what others do when they are last in the first turn. So good ride Kenny! Except for letting CW by at the end! What the heck…just block the guy will you next time.

Prediction: Well, with a caveat. Kenny will win some races if he starts to get some holeshots and the other top tier guys have issues.

Justin Barcia is still the points leader despite finishing ninth place. He had a poor start and was doing ok working his way up but then his shift lever broke off. Oh, he still has the red plate because Roczen got docked four points by the AMA for jumping on a red cross flag.

BUT the question is out there…is Barcia going to be the Barcia of years past where he starts the season great and then becomes a fifth place guy by midseason? Uhhh, yes we think so.

Prediction: Barcia is the same guy he always has been…super fast, at times. He has to be excited to go super fast. The ‘excitement’ of the new Gas Gas ride will wear off by midseason. He will still be entertaining but won’t win the title.

Predictions for Houston round three! 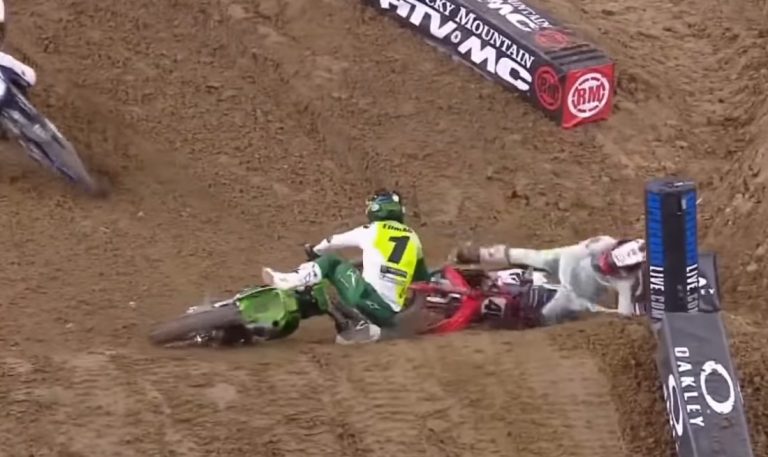 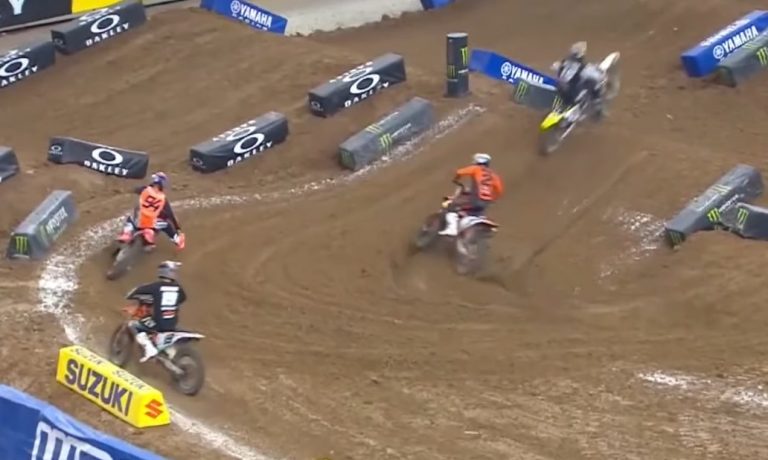 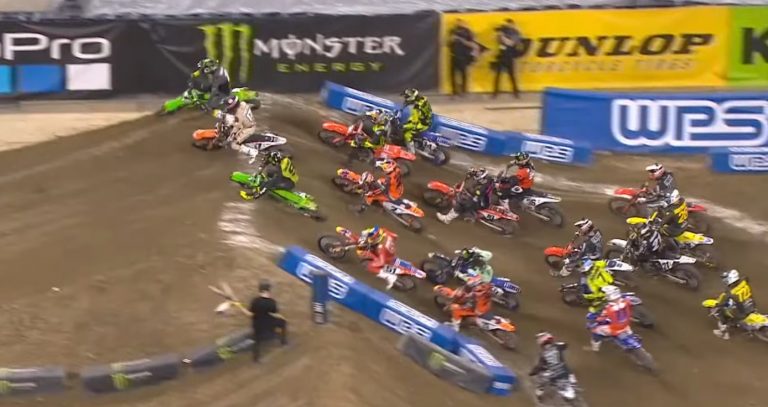